Chapter 2The Charge to Local Government

September 11, 2019 was a great day for the Washington Region. After a year-long effort by local planning and housing director staff, the Metropolitan Washington Council of Governments (MWCOG) adopted three regional targets on housing, agreeing to collaboratively address the area’s production and affordability challenges. The collective action, outlined in a resolution approved by the MWCOG Board of Directors, set out to determine:

In addition to setting regional targets, the resolution called on officials to work within their communities to adopt local-level targets on production, accessibility, and affordability. It also emphasized the need to work closely with the non-profit, private, and philanthropic sectors in achieving these goals.

The Urban Institute also released a study in the same month, “Meeting the Washington Region’s Future Housing Needs.” The analyses are complementary, and they both quantify the projected housing needs in the region in the coming decade. Both studies come to similar conclusions about the general magnitude of the issue: future housing needs far outpace recent housing production trends, and affordability levels should be targeted for this new housing stock so it can align with the needs of the region’s future population growth.

Despite these differences, both sets of targets provide a valuable lens on how the region can position itself to accommodate future housing needs. Forecasts are never perfect, but they do provide useful guidance for policy making and planning for the future. The Urban Institute targets serve as the foundation of the HIT for several important reasons: 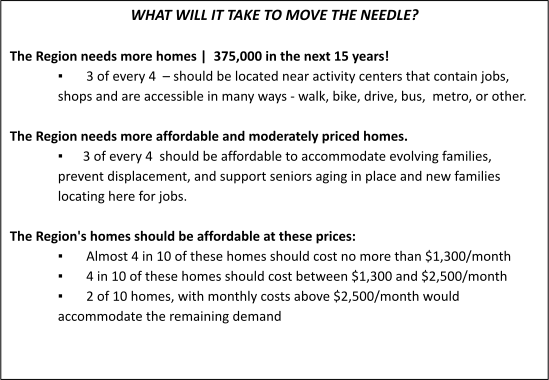